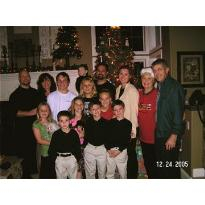 When Barry was young, he often walked by himself to serve at Mass many mornings before school as an alter boy. From childhood, he loved playing soccer, and continued to play into adulthood.

When it was time to decide on college, Barry was 1 of 2 candidates selected for the Naval Academy at Annapolis. At the same time, he was also offered a full soccer scholarship to Michigan State University. He chose MSU, and was the starting midfielder on both the 1967 and 1968 co-national championship teams. While in college, he worked part-time at a gas station. Later he borrowed $500.00 from his dad to start his own business, teaching himself auto repair. Over the years, he owned and managed several shops, with a loyal following of customers who relied upon him for his honest and efficient work. He took great care in making sure that everyone in the family had a well-running car?or if your car broke down he was always there for you with a loaner.

Barry was always very active. He had a love of the outdoors, and particularly enjoyed snowmobiling, water-skiing, sailing and boating. When he was 53 he tried wakeboarding and showed his athleticism by getting up his first try, even jumping the wake. He also earned his pilot’s license and flew airplanes for several years.

Chris found her soul mate in Barry and they have been madly in love since the day they met. Always supportive of each other; they’ve always hand enjoyed whatever they did as a couple and with their family. Barry was a fantastic dad and loved all of his children. Lana, Barry, Ryan, Lisa, Steven, Brian and Victoria brought so much joy to his life and he cherished each and every one of them.

A golf fanatic, Barry never missed his Thursday and Saturday games. Barry also enjoyed his monthly poker games and always cleaned them out! He was an avid card player and we will miss his score keeping?now our games will move much slower, but won’t be nearly as challenging since Barry could count the cards and always knew what had been played. He made sure the kids and grandkids learned to play pinochle as soon as they were old enough – absolutely the best teacher they could ask for!

Barry was an active member and prior President of the South Orange County Exchange Club. Barry was also a lay-member of Miles Jesu Soldiers of Jesus, an order of priests and lay-people that do Christ’s work around the globe. He was a parishioner at St. Kilian’s and San Francisco Solano Catholic Church.

Barry was a loving man and an example to us of a well-lived life. He was honest, caring and revolved his life around his family and friends. His family loved him and he was a good friend to all. We will always keep Barry in our hearts and remember all of the wonderful times we shared with him and the love he brought to our lives.