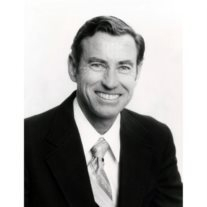 Barney graduated Loyola High School in 1946 and graduated from Loyola University, Los Angeles in 1951 with a degree from the School of Engineering. Barney practiced engineering at the Warren Company from 1951 to 1959. He then worked for Vons Grocery Co. and rose to the level of vice president. In 1978 his career path transitioned him as vice president of construction for the Ernest W. Hahn Co. in El Segundo. The Hahn Co. was one of the country’s largest retail shopping center developers. He opened his own construction company, NuHahn, in 1981 and retired in 1991.

After his retirement he and Mary began traveling around the world visiting Israel, Egypt, Europe, South America and the Galapagos Islands. They relocated from Palos Verdes Estates to Palm Desert in 1994.

Barney had a lifelong passion for the great outdoors particularly excelling as an outstanding fisherman and sharpshooter. In addition, he developed a passion for golf and played for many years with Mary and friends at Indian Ridge Country Club in Palm Desert, CA.

Barney Sheridan’s life will be celebrated at a memorial mass Saturday, January 25, 10:30am at Sacred Heart Chapel on the campus of Loyola Marymount University, 1 LMU Drive, Los Angeles, 90045.