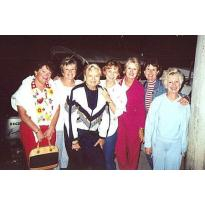 Barbara Jean Schone, age 66, beloved wife, mother, grandmother and friend, passed away peacefully on April 06, 2007 Good Friday at her home in Mission Viejo, California after a courageous three year battle with ovarian cancer. She was a twenty-five year survivor of breast cancer.

Barbara was born on October 13, 1940 in Kansas City, Kansas, one of four children to parents John and Anna Fabac. She attended Wyandotte High School and Kansas City, Kansas Junior College. She married her ‘high school sweetheart,’ Don Schone, on May 27, 1961 and together they moved to Downey, California. Barbara was part of Downey North American Aviation during the first moon landing. In 1970 they moved to the planned community of Mission Viejo, California with their two sons, Scott and Steve. She worked for Mission Viejo Company MVC, Public Relations-Community Development, from 1971 until her retirement in 1997.

Barbara devoted much of her retired life to volunteer work and historical MVC alumni projects within the community. On February 5, 2007, she was honored with the televised ‘Community of Character Award’ by the Mission Viejo City Council. Her close family and many MVC friends attended.

Funeral Mass and services will be held Friday, April 13, 2007 at 10:30am at St. Kilian Catholic Church in Mission Viejo, followed by a luncheon reception to celebrate Barbara’s life at the Mission Viejo Country Club and then burial ceremony at Ascension Catholic Cemetery in Lake Forest, California.

Barbara Fabac Schone’s special qualities of kindness, consideration and devotion to family and friends will be dearly missed. She will be forever in our hearts.

In lieu of flowers, memorial contributions may be made to the American Cancer Society.