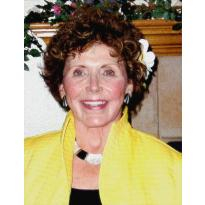 Barbara Jean Fieberg, 80, passed October 2, 2010, with her loving family at her bedside in Mission Viejo, CA, after a long battle with Leukemia.

Barbara was born December 15, 1929 in Zion, Illinois to Harry and Eleanor Davis Cunliffe-Owen and was a sister to four brothers and eight sisters.

She attended Zion Benton High School in Zion, Illinois. After high school she worked for the Chicago Northwestern Railroad as a payroll agent until a move to California in 1951. It was on the way to California, that she was married to Russell Fieberg at the Little Church of the West in Las Vegas, Nevada. They settled in Garden Grove, CA and had 2 children.

Barbara was a wonderful wife, mother, and friend. She was an accomplished painter, sculptor, and artist. She was active in local charities and was a volunteer at the San Juan Capistrano Mission. Barbara enjoyed life and was the always the life of the party, never wanting to miss a thing. She truly embraced living and had a wonderful time along the way, surrounded by her very special and dear friends and family. She touched many and will by deeply missed.

She is survived by her husband of 60 years, Russell, her son, Don, daughter, Carol, and four grandchildren, Eric, Lauren, Claire, and Chelsea