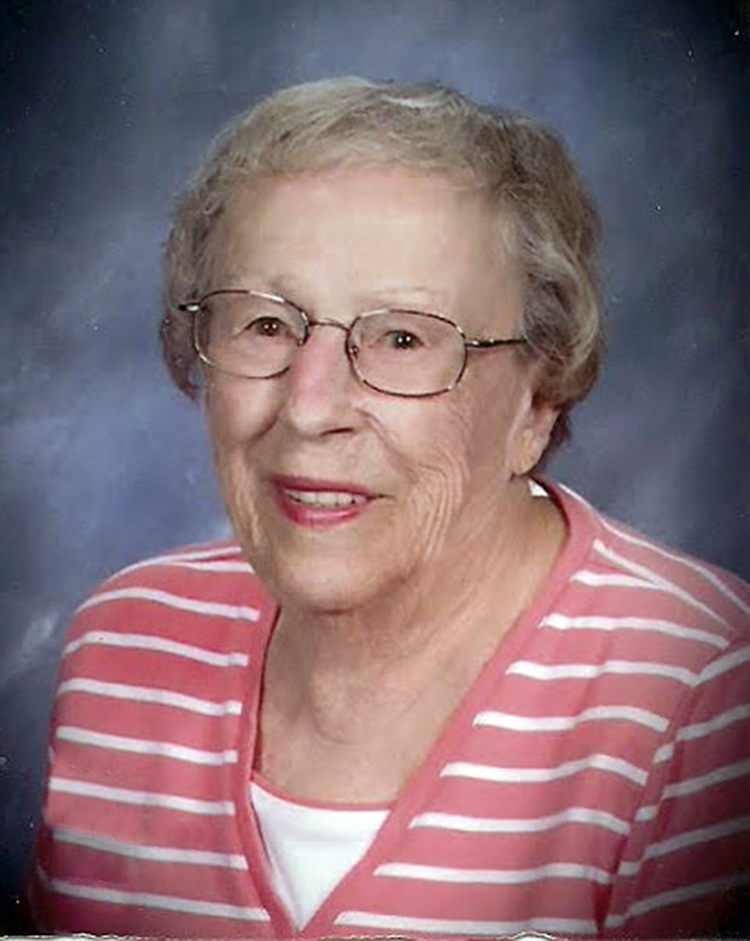 Barbara Ann Trudeau Jones entered the embrace of her Lord on April 2, 2019. Barbara was born in Los Angeles on February 5, 1931 to Mary Cecilia and Charles Alliance Trudeau. She lived all her life in Los Angeles and Orange counties. She graduated from Catholic Girls High School (known now as Bishop Conaty High School) as class valedictorian. She earned her BA in English with honors, and a teaching credential from Immaculate Heart College, where she was president of her sorority.

In her final weeks of college, she met Arthur V. Jones, Jr., a Loyola University graduate and pharmacy student at USC. Art’s active duty with the U.S. Navy soon began, and they married in 1953 before his tour of duty in the Korean theater of operations. Barbara taught early elementary grades in the Santa Ana School District and later in the Wiseburn School District in the South Bay. When Art transferred back to the Naval Reserves and returned to pharmacy school, they began their family, adding four children between 1957 and 1963.

The family moved to the Portuguese Bend area of what is now Rancho Palos Verdes, and Barbara started the most important “career” of her life, that of Mom. She thoroughly enjoyed every part of being a Mom, and participated enthusiastically in enriching her children’s lives. She was a Scout leader who loved taking her girls on camping trips, a religion teacher at St. John Fisher parish in Palos Verdes, soccer coach, and baseball scorekeeper for Art’s Little League teams.  She happily did without family vacations, instead spending all summer at Portuguese Bend Club. Every summer from 1966 to 1986 would find her and the kids at the beach all day, and many evenings she’d make dinner on the sand as well, ending the evening with guitar sing-a-longs around the bonfires. She won several Paddle Tennis tournaments at PBC, and took on all challengers at Scrabble and Mah Jongg.

Barbara was an adventurer. She taught her family to value experiences, and in 1970, she packed all four children, ages 6 to 12, plus her 67-year-old mother into her station wagon and embarked on a 5-week trip across the country, visiting historic and patriotic sites as well as friends and relatives.  For her entire family, “The Trip” became a lasting memory and was discussed for years around holiday dinners.

Barbara was successfully able to balance her family priorities as she went back into the work force. Barbara spent a decade in the family vitamin wholesale business, Erlex. She later applied her considerable skills to the furniture industry, specializing in inventory and purchasing and retiring after 12 years as the Fabric Manager for Lazar Industries. She and Art moved to Irvine, where she lived the rest of her life. She was active in her Irvine Catholic parish, St. John Neumann, loved birdwatching and developed a love for paper crafts.  During this time her greatest joys were participating in the activities and milestone events of her grandchildren and great-grandchildren.

Barbara was predeceased by her husband of 52 years, Art. She is survived by four loving children and their spouses: Cathy and Zane Smith, Charles and Patricia Jones, Carolyn Sermeno and Dr. Chris and Kim Jones. She was an active and loving grandmother to seven: Dorsie Beth Smith Brooks and her husband Tim, Meaghan Sermeno Wise and her husband Ben, Evan Sermeno, Tina Jones, Matt Jones, Sam Jones and Nick Jones. She was beloved “GiGi” to her two great-grandchildren, Liam Brooks and Evie Brooks. Barbara is also survived by her brother, Charles A. Trudeau.

Barbara’s faith was her guide and she walked every day of her life on her path to the Lord. She led many to God by her example and prayers. She has earned her “crown in heaven” and we know she is wearing it this day.