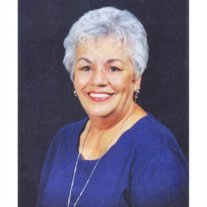 Barbara’s life was filled with music, song and a deep abiding love for her family and her Lord Jesus Christ.

She is survived by her husband, Eugene; her daughter, Rebecca Israel; son-in-law, Alan Israel; and grandchildren, Matthew, Marissa and Eric Israel.

Barbara and her 4 brothers were orphaned at an early age. Barbara was adopted by Esther Anderson in Duluth, Minn. She grew up in Duluth, attended school, married and moved to Long Beach California. Barbara and her first husband divorced in 1959. She soon met the “love of her life”, Gene, and they were married on November 17th, 1961.

Together, the little family lived in Long Beach where Rebecca attended school and Barbara and Gene became members of St. Luke’s Lutheran Church. Following Gene’s retirement from the City of Long Beach, Barbara and Gene moved to San Jacinto. It was here that Barbara’s memory began to fail and the family started down the long pathway with Alzheimer’s Disease.

Gene and Barbara moved to Orange County to be near their daughter and her family. In 2009, Barbara became a member of the Silverado “extended family” – a wonderful community devoted to the care of those with memory impairment. Their love and support sustained not only Barbara but her husband and family as well.

To honor Barbara’s memory, her family is requesting donations to the Alzheimer’s Association of Southern California: http://www.alz.org/socal/in_my_community_donate.asp.