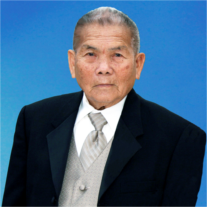 Ban Hoc Ly of Irvine, CA, passed away at 4:20 p.m. on Wednesday, February 10, 2016 at his home in Irvine due to natural causes. He was born on September 7, 1921 in Kpor Province, Cambodia to Suong Ly and Tuan Tan. Ban Hoc Ly married Suot Tan in 1943 and fathered a son and three daughters and then in 1956 married Hoy Ky and fathered another son and six more daughters.

Ban was preceded in death by his first wife Suot Tan in 1955 and his second wife, Hoy Ky in 1974. Also preceding him in death were his parents, Suong Ly and Tuan Tan; a brother, Saing Thien Ly; and a son, Tieng Bun Ly.

At the age of 18 years, out of respect for his parents, Ban became a Monk for a period of 9 months. His initial training was at his local Buddhist temple in Kpor, Cambodia; he later traveled to Thailand where he continued his study and training.

Ban and his family were victims of the Pol Pot Communist regime in Cambodia. The family escaped this brutal government in 1979 and spent several years living in refugee camps in Thailand and the Philippines before immigrating to the United States in 1982. Ban became a U.S. Citizen in 2000. He enjoyed spending time with family, taking daily walks, building things for his grandchildren and gardening.