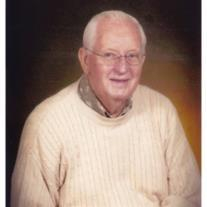 Autry Delmar Bull was born in Arkansas and raised in Bakersfield, CA. He was the son of James and Mirtie Bull and the brother of 5 siblings. He was in the first graduating class of East Bakersfield High School where a math teacher encouraged him to build on his exceptional math abilities. Upon graduation, he joined the U.S. Marines where his math skills were put to use as a navigator flying transport aircraft in the pacific theater during WW II. Among others, he flew missions for the Iwo Jima and Okinawa campaigns.

When the war ended, Autry returned to Bakersfield and met the love of his life, Donna Lee Holloway. Autry and Donna were married in Ventura, then made their first home in Bakersfield while Autry completed Jr. College. They moved to San Pedro, CA where Autry worked in the oil industry and completed his Petroleum Engineering degree at the University of Southern California.

Autry’s engineering career spanned 36 years and he retired in 1986 while in Houston, TX from the Tenneco Oil Corporation. After he retired, he continued to consult with Tenneco on the difficulties of extracting oil from tar sands where he developed technologies that improved recovery. He then returned to Bakersfield in 1989 where Autry’s passion was his family. He loved to take his children and grandchildren to Lake Tahoe or Sequoia or Pismo Beach and share time with them. He also loved to share the beauty of the oil fields with his family by driving around and pointing out interesting engineering aspects. Autry also loved family gatherings and his home was the place for many of these fun times. Autry and Donna were also active in their church where they gave much time and effort.

Autry will be buried at the National Military Cemetery at Miramar in San Diego. Condolences can be sent to: autrydonna1946@yahoo.com