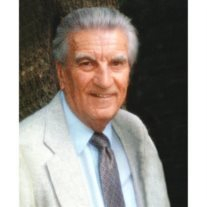 Louis Austin Shelton, Laguna Woods, CA, went to be with the Lord in his sleep on August 23, 2014 at age 87. Austin was born on July 28, 1927 in Shreveport, Louisiana to Benjamin Lee Shelton and Hazel Mae Russell and lived in Hatfield, Arkansas before moving to Weed, California when he was nine years old.

After enlisting in the Navy and serving on the USS South Dakota until the end of World War II, Austin attended Central Bible Institute in Springfield, Missouri to prepare for the ministry in Assemblies of God churches. This is where Austin met his future bride, Bonnie Mae Curry from St. James, Minnesota. Austin and friends pastored on Sundays in rural communities as ministers in out-station churches of southern Missouri. After he was ordained in the Northern California-Nevada district, he traveled to hold evangelistic services from 1950 to 1954.

They pastored in Vernonia, Oregon before moving to Vermillion, South Dakota, where they raised their family and pastored the Assembly of God Church from 1959 until their retirement in 1994. Austin enjoyed gardening, playing sports, and hunting pheasant with children and grandchildren in the cornfields of Clay County. He also served on the Vermillion Public School Board of Directors. Many summers were spent driving to visit family in California and Minnesota.

Earning his Doctorate degree in Educational Psychology in 1968 from the University of South Dakota, Austin worked as a school psychologist in Woodbury County, Sioux City, Iowa in addition to pastoring the congregation. Much of his work was dedicated to students with special needs and those in the juvenile justice system.

After retirement, Austin and Bonnie enjoyed traveling to work in an international school in Istanbul. They valued visiting children and grandchildren in Turkey, Scotland, Iowa, Colorado, Arizona, and Oregon; and travelled to Glasgow and Istanbul as recently as the summer of 2013.