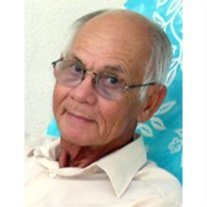 August Gieseke passed away peacefully on June 30, 2013 after an extended battle with “Lewy Body Disease” (similar to Parkinson’s.) He was 88 years old. August gently began his journey just the way he would have liked it, from the comfort of his own home, surrounded by family and friends. He is survived by his wife of 35 years (Inez), three son’s (Mulder Gieseke and wife Susan, Marius (Frans) Gieseke and wife Judy, Andy Dekker and wife Myrna), and daughter (Hester Ford and fiancé Kelly.) He also had seven grandchildren (Andre, Allyson, Christopher, Gabriel, Aracely, Marius and Sarah.) August is survived by a large extended family of caring in-Laws, cousins, nieces and nephews.

Born in 1925 on the Indonesian island of Java, August was one of six children, plus three step sisters. He was twice imprisoned as a POW during the Japanese occupation of Indonesia. After WWII ended, he married his first wife and briefly setup an import/export business. Seeking a brighter future, together with his wife and two oldest sons, they moved to The Netherlands and then shortly thereafter, he immigrated with his family to California in 1961. Working his way up from dishwasher, assembly line worker, and other assorted jobs (available to immigrants), he finally launched a successful career as a purchasing agent for various large companies and eventually retired in 1988 as the Purchasing Manager for ICI Pharmaceuticals in Pasadena California.

After his first marriage ended, August met his life partner, Inez, in 1977 and they were married the following year. August loved the beach and as part of their retirement planning, they purchased a home in Laguna Niguel to be near the beautiful Pacific Ocean. They never left.

August had a lasting impact on everyone he met. It did not matter whether it was family, friends, or brief acquaintances. He genuinely treated everyone as though they were his long lost friend. Always smiling, waving, talking, laughing and hugging, you were guaranteed to leave happier than when you first arrived. August will be greatly missed.

We would like to extend a special thank you to nephew Herbie Roostee for all of the assistance he gave to August and Inez to make their house more comfortable in the care of August and also to Saint Michaels Hospice for their superb caregiver support.