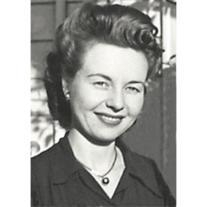 Born January 23, 1918 in Brookings, South Dakota to second generation Norwegians John and Palma Austin before moving to Long Beach in 1924 at the age of six. Attended Jane Addams Elementary School, Charles Lindberg Middle School and graduated from Long Beach Poly in the class of 1936. Married Elmer “Ben” Allmeroth in 1942, a union which lasted 65 years until Ben’s death in 2007.

Audrey was a devoted homemaker and mother all of her life. She made the best pies and preserves from the fruits of her backyard orchard making her home a popular place at harvest time. She was a talented violinist. After the child rearing years she and Ben travelled to Europe often, providing some of the best adventures of her life. She delighted in her children and grandchildren, all of whom were enriched by her care and concern.

Her last five years, she resided at Bixby Knolls Towers and enjoyed the company and conversation of many other residents and employees. She enjoyed a lifetime of good health and remained active into her nineties. The family would like to especially thank Elsa, Audrey’s loving and highly competent caregiver for the last five years.

Funeral service will be at 12:00 p.m. on Saturday, February 18 at Forest Lawn, Long Beach in the Memorial Chapel. Graveside service immediately following.