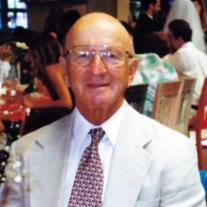 Armand P Letourneau, 93, of Mission Viejo died on Dec. 13, 2014. He was born in Burlington, VT., joined the Air Force in 1942 and traveled extensively including two tours in Wiesbaden, Germany. He retired in 1967, moved to Mission Viejo and had a second career with the postal service.

Armand’s passion was tennis, which he played well into his 90s.

He is survived by his loving wife of 71 years Pauline, children Lee and Diane, and grandson Christopher.

A service will be held on Sat., Dec. 20, 2014 at St. Kilian Catholic Church. 26872 Estanciero Dr., Mission Viejo. In lieu of flowers, donations can be made to St. Joseph Health System Hospice.