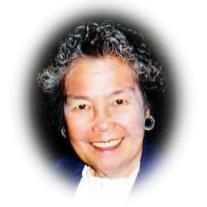 Apolonia Bermudez Santiago, 92, passed away peacefully of natural causes on Sunday, September 23, 2012 at her residence in Laguna Woods, CA.

Apolonia was born on February 9, 1920 in the municipality of Moncada in the province of Tarlac, Philippines. She is the third of four children of the late Patricio and Fortunata Bermudez. Growing up, she learned to value family, good education, hard work and above all else, faith in God.

In 1963, Apolonia married Wenceslao Santiago, Jr. in Tarlac, Philippines. They lived in Baguio City for several years before moving to Quezon City to raise their only son, Gil, as well as pursue a postgraduate program in education. She attended the University of the Philippines, graduating in 1972 with a Masters of Arts in Teaching (English as a Second Language), and the Centro Escolar University, graduating in 1976 with a Doctorate in Education.

In 1978, Apolonia emigrated to the United States, with the rest of the family joining her two years later. They settled in Laguna Woods, CA (previously known as Leisure World) where she lived most of her senior life. Her compassion for others steered her towards a new career in the helping profession of a care assistant. She lived life to the fullest beginning life in learning and adapting, moving on to enjoy stability and success, and then caring for others.

Apolonia is survived by her husband Wenceslao, and son Gil and wife Carol of Morton Grove, IL as well as two grandchildren, Kristoffer and Kristin. She will be greatly missed by her family and friends.

A funeral liturgy will be held on Saturday, September 29, 2012 at 9:00 AM at St. Nicholas Catholic Church, 24252 El Toro Road, Laguna Woods, CA 92637. The funeral procession will proceed immediately to the Interment at Ascension Cemetery & Guardian Angel Mausoleum at 24754 Trabuco Road, Lake Forest, CA 92630.

2 responses to Apolonia B. Santiago