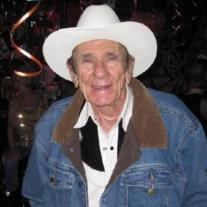 Tony Salvatore Crimi was born July 2, 1925 in Cleveland, Ohio, to Benedetto and Rose Crimi. Tony passed peacefully on July 26, 2012 in Laguna Hills, CA. He was surrounded by his loving family. He is survived by his three daughters, Linda, Darlene, and Dianna and also by his five grandchildren, seven great-grandchildren and one great-great granddaughter. Tony was a Veteran of the United States Navy and served in World War II. He started his career at Gladding McBean as a pottery maker and then went on to open Nino’s Italian Restaurant. After he sold his restaurant, he joined the Carpenters Union Local 563 in Van Nuys, CA where he remained a member for 44 years. After he retired, he enjoyed working with his grandsons, Jason and Chris Bouquet, at Bouquet Enterprises. Tony enjoyed doing many things including playing cards and spending time with family, but most of all he had a love for country western dancing. He spent several nights a week at the Swallow’s Inn in San Juan Capistrano dancing and being in the company of friends. He has been dancing there for over fifteen years. He became an icon to those who frequently attend and was known as “Two Steppin’ Tony”. He loved to dance with all of the lovely ladies and made sure that they were never left standing on the sidelines. Tony had a passion for life and would always light up the room. He brought dance into the lives of many and joy into everyone’s hearts. He will be truly missed. The family finds comfort in knowing that he is dancing with the Angels in Heaven.