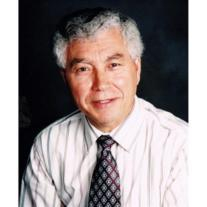 Anthony Maddaloni, age 69, of San Juan Capistrano, California passed away on Monday, March 12, 2012, in Mission Viejo, California. He was born on September 25, 1942 in Melizzano, Italy, and was the son of the late Emilio and Catarina Maddaloni.

In addition to his parents, his brother Vincent predeceased Anthony. He is survived by his wife, Lauren Maddaloni and their two children Paul and Christina, his sister Maria Ferrucci, as well as many nieces and nephews.

Anthony moved to this country in 1953 with his family to New England. Lauren and Anthony met in East Haven, and lived in Guilford for many years.

He became an avid Brooklyn Dodgers fan and loved to garden. He had a thirst for information, and could always be found reading, happy to share his knowledge. He had a deep faith, and was a devout Catholic. Anthony had many different careers over the years, but spent his last 20 working years as a real estate broker before retiring in 2008. He was a warm and good man, and will be deeply missed.

He has been laid to rest in Ascension Cemetery in Orange County, California.