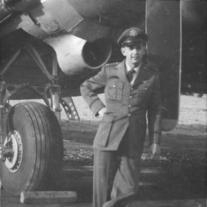 Anthony ‘Tony’ Jasinski, Sr., 92, was born July 18, 1919 in Manchester, New Hampshire, and passed away March 18, 2012 in San Juan Capistrano, CA. He served in the US Air Force for 27 years, retiring in 1969 at the rank of Lt. Colonel. As a pilot in World War II, Tony completed over 50 missions and received the Distinguished Flying Cross on what was counted as his 6th and 7th missions over Budapest Hungary on April 3, 1944. His first mission was on 3/22/44 over Verona, Italy and his last mission was on 7/5/44 over Montpellier, France. Total flight time of 245 hours 30 minutes.

His flight squadron, the 32nd Bomb Squadron of the 301st Bombardment Group, is celebrated on the website: www.301bg.com/32nd_Bomb_Squadron.cfm.

After the War, he changed his last name to Jason.

Colonel Jason went on to serve as a Communications Officer in Seoul Korea during the Korean War. In 1964-1966 he was stationed in Libya, where he participated in NASA’s Gemini Space Program. From January 1967 until his retirement in 1969, he flew over 50 Medical Air Evacuation and cargo missions in Vietnam. After his retirement from the Military, Tony continued his civil service by working with the US Border Patrol for 20 years.