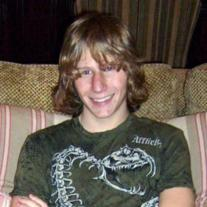 Tony spent his life in Orange County, California, while living in Laguna Hills, Laguna Niguel, Newport Beach and Dana Point except for 2 years living in the Sierra Nevada Mountain range in the town of Mammoth Lakes.

Tony was a high school graduate of the Mardan School in Irvine, CA. He obtained a state license in Phlebotomy and worked for Westcliff Labs. He ran their San Clemente branch office completely by himself. With his friendly demeanor and kind ways, he made his patients comfortable while drawing their blood, answering phones, submitting insurance and processed test results.

Most recently, Tony began working at LinearChip, Inc., which is a family-owned business in the microelectronics field. He held a position as a layout designer where he created the mask patterns for microchips. He had become very proficient in his work and was a real talent.

Tony was known for his high intellect, quick wit and kind demeanor. He had a vast knowledge of many subjects and could converse about any topic. He had a love of the outdoors, especially the ocean and the mountains. He loved animals and insects alike.

Tony was able to master many things quickly. He was an excellent athlete who skied and swam very well. In addition, he played baseball, soccer and tennis over the years. He had excellent musical abilities and played the clarinet and piano.

An avid player of video games, Tony mastered and beat just about any game that he played.

Most importantly, Tony was an extremely gentle person who never had an unkind word to say about anyone. He showed us how to love and accept people unconditionally.

Tony is survived by his parents, Jill and Denise, brothers John and Joseph, sisters Christina and Mary and grandparents Jim and Jean Vanderheide.

Tony was a truly wonderful person who will be greatly missed every day!

Services will be held on Friday, December 2nd at 1pm at O’Connor Mortuary located at 25301 Alicia Parkway, Laguna Hills, CA 92653.