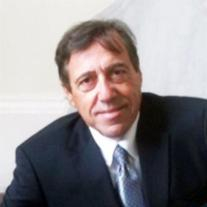 To his many friends and his family, Tony Finizza, beloved by everyone who knew him especially his wife Carol, will be remembered as funny, kind, courageous, generous– and humble about his many great accomplishments in economics and the oil industry. He cherished his family and friends and was a wonderful companion, keeping them amused with his dry sense of humor and quick wit, brightening the good days and helping them get through the bad ones.

At Atlantic Richfield (ARCO), where he served as Chief Economist for more than two decades, he famously established the “Rip Van Winkle” method for forecasting oil prices. The method gauged the degree of certainty with which the company should hold a price view (sleep on it like Rip) and created an early warning system of variables to monitor. After retiring from ARCO in 1996, Tony taught economics at University of California, Irvine where his students consistently rated him a “5” out of five on the “Rate Your Professor” website. According to one UCI student, Tony was the “best professor hands down! His curriculum is vital to the business world. Take him.”

Tony died at Mission Hospital in Mission Viejo on December 6th of respiratory failure. He was 69. At the time of his death, Tony worked for Econ One, an economic consulting company. There, he consulted with clients on oil and gas issues, developing simulation and econometric models of oil market behavior, authoring a study about the economic benefits of mitigating refinery disruptions and working with government agencies on tax policy. He loved being part of the Econ One team but most of all he loved the team.

Tony was born in Worcester, Massachusetts, to Tony and Theresa Finizza. He lived in the suburbs surrounded by a large, right-off-the-boat Italian family. He skipped first grade and was considered the “perfect child” by his teachers. Behind the scenes he was full of mischief, always playing pranks but never getting in trouble. After eighth grade, Tony moved with his family to Northern California for a short time before settling in Southern California where he attended Lynwood High School. He graduated at the top of his class and was honored with a full scholarship to the University of California, Berkeley, where he earned a BA and MA. From Berkeley he went on scholarship to the University of Chicago where he earned a PhD in economics at 26.

Tony stayed in Chicago for another eight years, where he worked for Data Resources Inc. (DRI) as Vice President and Regional Manager and at Northern Trust Company until 1975 when he moved back to Los Angeles to join the Corporate Planning staff at ARCO. Tony moved to Dana Point in 1992.

Besides volunteering at the Friendship Shelter in Laguna Beach, Tony served on the advisory board of the Institute for Transportation Studies at University of California, Davis and the International Association for Energy Economics (President, 1996). He was also a senior fellow of the U.S. Association for Energy Economics, the Institute of Business Forecasting Education and was appointed to four National Academy of Science committees. Most recently, the California Scholarship Federation established The Anthony J. Finizza Award, a scholarship given annually to deserving high school students.

Tony loved to travel with family and friends. He enjoyed wine-tasting in Tuscany, touring the French countryside, relaxing at seaside cafes in Greece and cruising the Mediterranean and Caribbean. Mostly, Tony loved being at his home by the beach where he enjoyed reading, writing, playing tennis and spending time with his family.

The family’s only comfort is our faith that Tony is in heaven with his beloved dog Blaze sitting by his side, probably playing cribbage with Einstein and other big thinkers, discussing the annoying constraints of the scientific method, the truth about climate change and whether or not the LA Dodgers will ever get its act together.

A celebration of Tony’s life will be held on Saturday, January 12th, at 11:00 am at St. Edwards the Confessor Church, 33926 Calle La Primavera, Dana Point, CA 92629, immediately followed by a reception. Tony’s parents request that in lieu of flowers donations be made to Johns Hopkins University Medical Institutions, Pancreatic Research in memory of Anthony Finizza, Jr., 401 North Broadway, Weinberg 2242, Baltimore, Md. 21231.