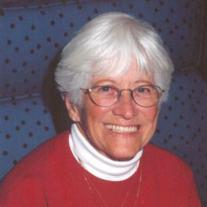 The family moved from Rock Island to Whittemore, Iowa, then to farms in Jackson, Minnesota and Wesley, Iowa. Finally they moved from Wesley to Burt, Iowa in 1945. She graduated from Burt High School in 1949. During high school she worked for Vogels Grocery Store in Burt. She married Lorimer ‘Barney’ Olson, the music teacher at Burt High School, at the Little Brown Church in Nashua, Iowa in 1950. They moved from Burt to Spirit Lake, Iowa where she worked for Berkeley Industry making fishing tackle. From Spirit Lake they briefly moved to Sioux City and then to Algona, Iowa where she worked for Honsbruch Pharmacy. The family moved from Algona to California in 1966. As the children went to school Ann and Lorimer were divorced in 1973. Ann worked many jobs making sure her children were fully supported. Finally she found an entry position in electronic assembly, worked hard earning several promotions to supervisor where she met Jerald Guberman in the 70’s. Finally on May, 26, 1994 after 19 years of courtship Ann and Jerry were married.

She was a very talented artist and worked with all media, but was especially good at oil painting. She studied under a Czech restoration painter who worked at the Louvre. She met one of her lifelong goals of painting an oil painting for each of her children and siblings to remember her by. Everyone cherished the paintings she did. Finally in 2001 she developed Alzheimer’s which robbed her of her talent but she painted and did crafts until 2008.
Ann passed away at 7:15 pm On October 1, 2011 peacefully in her sleep at the home of her son Scott. She was surrounded by family.

A simple informal “Tribute to Ann’s Life” will be held at her last home, 72 Tessera Ave Foothill Ranch, CA 92610. Our home will be open from 1 pm until 7 pm on October 22, 2011. Everyone who knew Ann is invited to stop by and reminisce about her life. We sincerely request that no flowers be sent and if you feel a donation is necessary please donate to (www.alz.org.) or your favorite charity in her name.