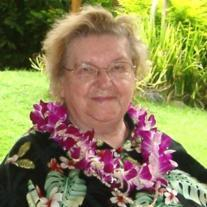 Anne Marie (Fischer) Moritz was born on August 8, 1926 in Berlin, Germany, the daughter of Friedrich and Herta Emma (Mueller) Fischer. She immigrated to the United States in 1953 and resided in Salt Lake City, Utah until she moved to Los Angeles, California where she eventually met and married her husband, Hans Carl Moritz, in 1961 who preceded her in death in 2005.

Anne was a lifetime member of the Church of Jesus Christ of Latter Day Saints and worked for Ricoh Electronics for over 25 years.