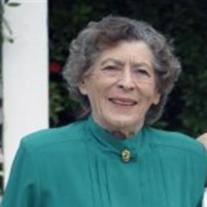 Annabelle Louise Miller passed away peacefully early Saturday morning, December 15, 2012 at the age of 78. She enjoyed reading, spending time with her grandchildren, and a long, fulfilling accounting career that lasted until the day of her passing.

She is survived by her brother, Keeton Arnett of Massachusetts, sister, Cathy McGarity of North Carolina, her four children, daughters Leigh Stroebel of Oregon, Kim Miller of Colorado, Robyn Fischbach of California, and son Aubrey Miller, III of California, as well as two grandchildren, and four great-grandchildren.

In lieu of flowers, the Miller family requests donations to the Kim A Fischbach Memorial Foundation at www.realworldimpact.org/getinvolved in memory of Annabelle. This is a foundation that Annabelle believed in and supported since the passing of her son-in-law Kim.