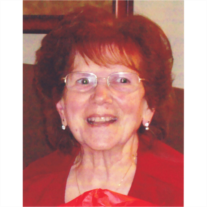 Anna Gullo LaBarbera, was born in Brooklyn, New York, the first child of Jim and Jennie Gullo. It was there on September 15, 1951, she met and married Vincent LaBarbera, and in 1952 Vince and Anna moved to Claremont, California where they lived for 45 years.

Anna was a Special Education teacher for the Claremont Unified School District, specializing in dyslexia. As a devoted volunteer, she spent countless hours as Director of Fundraising for her local chapter of the American Cancer Society, and Pomona Valley Hospital. In the time she lived in Claremont, Anna was a member of our Lady of the Assumption Catholic Church where she was a Eucharistic Minister, and ministering Communion to the sick in their homes. She was also responsible for the planning and production of the Parish’s annual Fiesta and St. Joseph’s Table celebrations.

In 1997, Vince and Anna moved to San Juan Capistrano to live near their children and grandchildren. They both became parishioners in their local Catholic Church and it was through that association that Anna found fulfillment as a volunteer Docent for the San Juan Capistrano Mission, and member of the Mission Women’s Guild.

Anna will be remembered for her warmth, thoughtfulness, unceasing loyalty and devotion to her family and friends, her love of books and the opera, and especially for her amazing Italian cooking. She is survived by her son Vincent LaBarbera; daughter Diane Shepherd (David); grandchildren, Taylor and Nicholas LaBarbera, and Sara and Lauren Shepherd; nieces, Jeanne Gullo and Teri Gullo (Peter Linquiti); nephew Jim Gullo (Maria); great-niece Megan Linquiti and Roberta LaBarbera.

She was preceded in death by her husband Vincent; her brother Salvatore; and her parents Jim and Jennie.