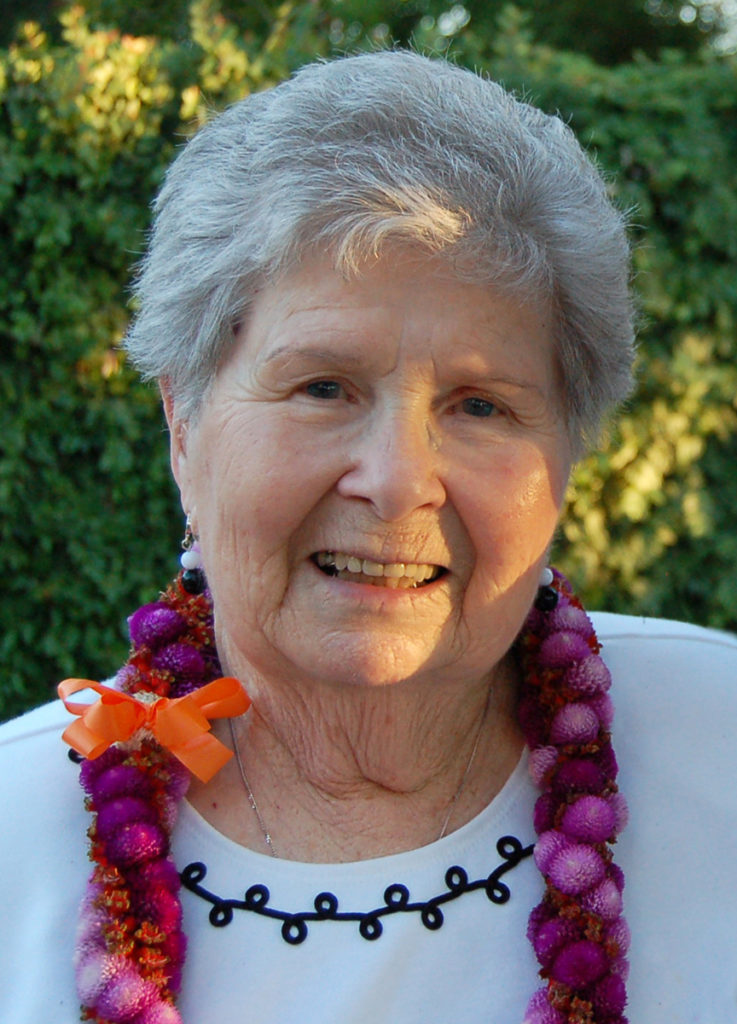 Anna Mae Calvet of Lake Forest, California died at her home (Freedom Village) peacefully on May 15, 2019 surrounded by her loving family, at the age of 94 years.  She was preceded in death by her husband Francis Calvet and daughter Mariann.  She is survived by her children Douglas, Bill, Jeanne, Charlie and Al, 14 grandchildren and 16 great grandchildren.

Anna was born on May 24, 1924 in her parents’ home in Central Valley, New York.  She had an idyllic childhood growing up with her 3 sisters and 2 brothers in the small upstate New York town.  In high school, she enjoyed playing field hockey and basketball, playing clarinet, tap dancing and cheerleading as well as excelling academically. She married her high school sweetheart, Milton Rose, Sept 1943.  Milton was an Air Force pilot in WWII.  After the war on July 26, 1946, Anna gave birth to a baby boy, Douglas.  Milton continued his military service in the Army Air Force, but shortly after the birth of Doug, he died in a plane crash on a training mission.  This was very traumatic for Anna, but she had tremendous support from her mother and father who helped raise Doug while she went to work at Rockland Electric Company.

A few years after this, as she was leaving work, her car wouldn’t start in the parking lot.  She called Calvet Pontiac Agency for assistance. Francis Calvet came out to assist. Shortly after, they began dating and within 7 months were married on April 15, 1950.  Over the next 10 years, Anna and Fran proceeded to bring into this world 5 more children.  They provided a warm, loving home for the kids.  Fran working hard at his business with his brother Ted and Anna working hard taking care of the kids, home and finances.

In October 1959, Ted and Fran purchased a GMC dealership in San Fernando California, so both Fran and Ted’s families moved to California.  The first 5 years, Anna and Fran’s family lived on a 4 acre ranch in Sylmar where they had 3 steers, a goat, chickens, a turkey and a couple horses to keep the kids busy and entertained. During this time, Anna took adult education classes at San Fernando High School in “clothing construction” where she became proficient at sewing.  She was able to sew clothing and prom dresses for the girls.

After a few years of living on a “farm”, Anna had enough.  Anna and Fran found their dream home in Granada Hills, CA.  The house was a single level, “ranch house” where they had enough room to install a pool later.  They lived in this house from 1964 to 1985 where there are many fond memories of the children growing up, parties, graduations, neighborhood get togethers.

As the children got older, Anna got her Real Estate license and worked in property management for several years.  After Fran and his brother Ted sold their business, Anna and Fran bought a small condominium, their “Beach Home” in San Clemente, CA. They began spending time in both locations until they sold the Granada Hills house.  They moved into a new house in San Clemente on Calle Contenta which had a wonderful ocean view.  They truly enjoyed their retirement years in San Clemente.  Their home became the family gathering spot for many years.  They enjoyed to travel, but most of all visits with their children and grandchildren.

As Anna and Fran reached their late 80s, they decided to move into an independent living facility “Freedom Village” in Lake Forest, California.  They sold the San Clemente home and settled into the “easy life”. Fran passed away at the age of 90 shortly after moving into Freedom Village.  Anna found it very beneficial after Fran was gone to have friends at Freedom Village to have dinner with every night and to have “nothing to worry about”.

Funeral service and Mass will be held on Saturday, June 22 at 9:00 am at St Nicholas Catholic Church, Laguna Woods.  Reception to immediately follow.