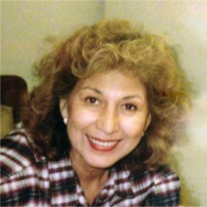 May Archibald passed away peacefully from this life on May 19, 2016, after a gradual decline in health. She was surrounded by her loving family. She was born in Cirebon, Indonesia, and has been a resident of California since 1960. She was a kind and loving person, but with a fun and feisty personality. She was incredibly hard working and willing to take on new challenges and learn new things. She was an inspiration to all of us.

May was born in Cirebon, Indonesia, to Willem Den Hartog and Christine Goncalves. She survived internment in a concentration camp during World War II, then immigrated to Holland after the war. She was educated in Holland and later met and married Dita Wudich. They moved to Thailand for his employment. Sadly, Dita passed away suddenly at a very young age, leaving May a widow at the age of 21. In 1960, May immigrated to the United States and very quickly gained employment, her driver’s license, and citizenship. In 1963, she married Brent R. Browning, and they had a daughter, Monique, in 1964. After their separation, May became a single parent for the next six years. Her parents helped and supported her during this time and they became very close. In 1972, she met and married Lee T. Archibald, and they had a daughter, Michelle, in 1973.

In the 1970’s, May started working as a real estate broker and she rapidly grew her business, ultimately making many investments herself in real estate. May was known for being fair and honest in business practice, as well as giving meticulous attention to detail.

After spending 28 years in Fountain Valley, May and Lee retired in 2000 and moved to a new home in Lake Forest. They enjoyed their retirement, spending as much time as they could with their grandchildren. She was a cherished Oma to her six grandchildren. May and Lee also enjoyed traveling to various places around the world. She had a wonderful memory and, when asked, she could recall the names and experiences as if they were yesterday.

May is survived by her husband, Lee, and her two children (and spouses): Monique Carroll (Chris) and Michelle Aspesi (Dan); six grandchildren: Alyssa (Roy), Lauryn (Ryan), Kelsey, Morgyn, Dylan, and Chayse. May is also survived by her sister, Joyce Ooms, and her brother, Stanley Den Hartog. She was preceded in death by her sisters, Maud Leijder and Peggy Birkenfeld.

May was an extremely generous, honest, and sincere person who was loved and respected by all who knew her. Her departure leaves a huge hole in our hearts and lives, and we can only find solace in the fact that she is in a better place now and we will see her again.