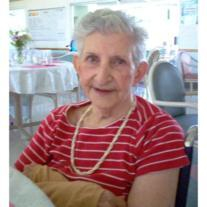 Amelia Avellanal Ribeiro, 84, of Anaheim passed away, Monday, December 31, 2012. She was born to the late Felizardo and Maria Amelia Avellanal on Feb. 26, 1928, in Santana do Livramento, Brazil. Amelia graduated from St. Teresa de Jesus College in Brazil, where she received a Bachelor’s degree in education.

She married Bento Manuel Ribeiro in 1952, and they had 3 children, a son, Bento Jr. (deceased) and two daughters. They lived in several states in Brazil, until they relocated to Los Angeles in 1964.

Amelia worked as a legal secretary at Ramona’s Mexican Food Products for many years, she retired in 1986. She loved to travel, do cross- stitching, puzzles and word searches. She also loved to decorate and bake for the holidays.

Amelia is survived by her two daughters, Beatriz Cowick and Solange Negri, son in laws, Greg Negri and Mike Cowick. She is also survived by her granddaughter, Claudia Steigerwald and three great grandchildren, William, Robert and Sarah.

A graveside service will be held at 10a.m. on Monday, January 7, 2013 at Ascension Cemetery in Lake Forest, Orange County, California.