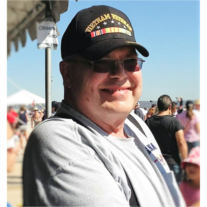 Skip was born in Portland, Oregon, the oldest of 3 children to Dr. Kirk W. Springer and Alameda Springer (siblings Pam and Richard).  Raised on Lake Serene in Lynnwood, Washington he attended Cascade High School (Class of 1964).  His father Kirk was a dentist in Edmonds, WA, and in his teenage years, Skip helped out in the office dental laboratory. In 1965 Skip enlisted in the U.S. Navy, hoping to experience the Vietnam War from a boat instead of being drafted into the Army. He chose training in the field of dentistry, continuing down the path he started in his teens. But, since his training was in a medical discipline, he was designated as a Corpsman and spent 13 months ‘in-country’ (’67 – ’68, from Da Nang to the DMZ) attached to the U.S. Marines (1st Marine Division, 1st Dental Company, FMF). After his tour in Vietnam, he served on the U.S.S. Kitty Hawk in 1968 during the ship’s re-fit. Later that same year, Skip was transferred to a new duty station in Taiwan. It was in Taiwan that he met and fell in love with Agnes ‘Aggie’ Lee. They met in the spring of 1969 and married just a few months later in the Summer of Love. Skip and Aggie just celebrated their 47th wedding anniversary on August 16th.

After an honorable discharge from the military in April of 1970, the newlyweds Skip and Aggie returned to his home in Washington State. Two years later they welcomed their first child, daughter Mae Lee into the world.  The young family moved to Southern California in 1973, wanting to make a new start in a growing area.  While in the Navy, Skip had been stationed at Camp Pendleton and in San Diego – he became a big fan of the weather, which motivated him to return to Southern California as a civilian.

To support his family and put his talents and training to work, Skip opened A & A Dental Lab in 1975. He developed a reputation for providing high-quality work and personalized service. Skip built long and strong working relationships with many dentists throughout South Orange County over the course of his 40+ years in business, helping to re-create smiles for thousands of people.

Skip and his young family bought their first home and planted roots in El Toro (now Lake Forest) in 1977. A few months after moving into their new house, a new member of the family arrived – son Derrick. With the family now complete, Skip settled into life in the suburbs. His time and energy was split between running his business and raising his children, but his family always came first. He was a dedicated leader for Derrick’s Cub Scout pack, and loved participating in Boy Scout meetings and campouts with his son. He drove tirelessly without complaint on their numerous family road-trips. Skip had a love for the outdoors, so National Parks were a popular family destination, as were road trips up the California coast to San Francisco and all parts in between. He went fishing with the family every chance he could, and tried to pass his enthusiasm for fishing down to his children.

One of Skip’s favorite domestic pastimes was home improvement. He was always in the garage building something, in the house fixing this-or-that, or improving the house that he and his family lived in. He single-handedly installed their house’s central air-conditioning system, built beds and furniture, and rebuilt and remodeled everything he could get his hands on. Skip loved working with his hands, whether making dentures or working on the cars. Life continued at this pace for a good long time. His children grew up, the business kept going through good times and not-so-good times. But overall, things were relatively stable.

Then things changed. In 2001, Skip was diagnosed with colon cancer. He underwent chemotherapy, radiation and surgery to remove the cancer, receiving treatment at the VA in Long Beach. Although it was thought that the treatment was successful, the fear of a relapse was now in the back of everyone’s minds. Skip’s diagnosis and treatment brought a close family even closer together. Aggie, Mae Lee and Derrick all felt like they had a second-chance with Skip, so they all enjoyed his and each other’s company with even more love and appreciation. Over the next ten years, Skip’s health began a gradual decline, as other conditions arose. He developed neuropathy in his right leg and lower back that gave him chronic pain and muscle weakness. In December of 2011 their worst fears were realized when biopsy confirmed that the cancer had returned. With his usual optimism, Skip’s reaction was ‘OK, let’s treat it and beat it.’ His greatest joy in life came from being with his family, who gave him the strength and motivation to pick up the fight again. So he started treatment for cancer and for his nerve pain, but with limited success. He lost feeling and motor control in his leg, and developed complications in one of his kidneys. Still, he bravely faced it all head-on, with fearless optimism, always with the attitude that He Would Win. And he did win – when he passed, the cancer did too.

Even during the treatment and through the medical issues, Skip kept working and remained family oriented. A & A Dental Lab had various locations over the years, operating from his house for many years. In 2014 he moved the lab into his daughter Mae Lee’s dental office. Though it was only for a couple short years, Skip loved this location most of all as it gave him the opportunity to work side-by-side with his daughter. It truly became a family business.

Skip was a good man, a family man, a loving husband and a nurturing father. He smiled far, far more than he frowned, always kept his temper, and loved to laugh at his kids’ bad jokes. His genuine demeanor and friendly spirit, coupled with a goofy sense of humor, endeared him to most everyone who met him. He was devoted to his family and to his work, often at his own expense. Skip would not want tears from those remembering him, he would want smiles from them. He is and will be missed dearly.  And the world’s fish population can rest easier.