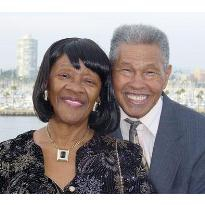 Almeta and Maxcy, affectionately known as Rube and Mack, had a love that endured for over 58 years. In life, they were always by each other’s side. So it was no surprise that when Rube was ready to move into the posh exclusive community of Heaven and had picked out her Mansion on the streets of gold in the pearly gate guarded community of Eternal Bliss, Mack was ready to go too. They will probably set up residence on the same street with their parents, Aquilla Frazier Montgomery and Albert Montgomery, Rube’s parents living on one side, Elizabeth Lee Trimmings Robins and Isiah William Robins, Mack’s parents living on the other.

It must have been fate that the two would be together having both been born in Arkansas, Mack in Marianna on July 10, 1930 and Rube in Helena on September 2, 1934. They were only 30 miles away from each other but didn’t meet until they were both living in Detroit, Michigan. As a young boy, Mack loved going to the movies at The Blue Heaven with his sister Frances, where they would watch Roy Rogers and Gene Autry Westerns. He also liked teaching her about every make and model of car that drove by as they watched from their front porch on Alabama Street. Around the age of 6, Mack started working for Mr. Ed Walker at The Duck Inn. This is where he perfected the fine art of BBQing Ribs that he was famously known for. He continued working there all through high school. Mr. Ed Walker wanted Mack to take over the business but he wanted to head up north. And that he did, after graduating from Marianna’s Robert R. Moton High School in 1950, where he was the class treasurer and played football. Rube came up to Detroit as a young girl in 1945. They were introduced through Grandma Aquilla and Aunt Missouri who were good friends. Missouri was married to Mack’s Uncle Pompy Hall who let him live with them when he first arrived in Detroit.

After an unwavering courtship, Rube’s Uncle Preston married them October 4, 1953 in their first home that they rented from Grandma Aquilla. Rube’s grandmother, Rebecca Reed, lived with them and helped the newlyweds on their road to marital bliss. Mack eventually found work at Chrysler where he worked as a trimmer installing car seats on the assembly line for 30 years. During times of lay off, Mack always managed to find work to support his family. Rube started out as a Bookkeeper while she attended East Commerce High School. She was always good with numbers. She was a member of the Eastern Star’s Junior Majorettes along with her sister Velma. They traveled to Canada and were in several parades. After they were married, Rube went to cosmetology school and became a hairdresser. Rube became sick early in the marriage with rheumatic fever that left her with a heart murmur. So their bouncing bundles of joy didn’t start arriving until 5 years later. Valerie Jean (Eric J. Ludwig) made her appearance in 1958, followed by Maxcy Dean Jr. in 1960 and Pamela Joann (Carlos Agramonte) popped up in 1964. A few years later, Rube went to nursing school and got her Licensed Practical Nurse degree and worked at Henry Ford Hospital. Once the children were older she returned to school for her Registered Nurse Degree.

Around 1981 Rube got a job as an RN at Kaiser Hospital in Bellflower, California. It was always one of her aspirations to live in sunny California. She moved in with Valerie. Mack followed shortly from Detroit after his retirement. Sound familiar? In the ensuing years, Rube found several homes until eventually settling in their dream house with a pool in Lakewood, California. Mack happily agreed. Do you see a pattern here? Whatever Rube wanted Mack gladly obliged. He treated her like a Queen and they loved each other dearly.

Mack loved cars and made the best ribs on the planet. Rube was an excellent cook and loved shopping. She had enough clothes to open her own department store. They were kind and generous to friends and strangers alike. They both loved God and their church, Willow Street Church Of God, where Rube was the Senior Adult Sunday School Teacher and Mack was an Usher and on the Finance Committee and Trustee Board. He also was responsible for opening and closing the church. They were devoted members and attended faithfully until their health failed. Rube joined the Church Of God in Detroit at 19 years old. Mack was baptized in the river in Marianna around age 13 along with his childhood friend Eugene White. He became a member of Livingston Chapel Methodist Episcopal Church.

Mama and Daddy, we were blessed to have such loving parents. You will be greatly missed and we will cherish you always. You are both free of the pain and suffering you endured and are now filled with heavenly joy. One day we will see your Mansion. I’m sure you all will have a guest room ready.