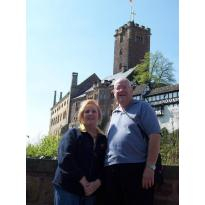 Rev. Dr. Allen Richard Beyersdorf March 23, 1947 – August 18, 2011, resident of Lake Forest, California, was called to his eternal rest in Heaven due to the grace of Jesus Christ after a courageous ten-year battle with mesothelioma. He died at Saddleback Memorial Hospital without pain, with his family by his side, and in the Lord’s hands.

Allen was born and raised in Milwaukee, Wisconsin, and graduated from Wisconsin Lutheran Preparatory School and Northwestern College. In 1973, he graduated from Wisconsin Lutheran Seminary and was called and ordained as minister of Living Word Evangelical Lutheran Church in Mission Viejo, California. In 1983, he earned a Masters of Sacred Theology from Wisconsin Lutheran Seminary and in 1997, a Doctorate of Ministry from Concordia Theological Seminary, Fort Wayne, Indiana. While at Living Word, Allen started the Good Shepherd Bible Camp for the Wisconsin Evangelical Lutheran Synod Arizona/California District and was chairman of the California Lutheran High School Board of Directors. In addition to his theological work, Allen received an Associates of Arts degree in accounting from Saddleback Community College. Allen retired from his ministry in July 2011 after 38 years at Living Word.

Allen was born to Allen Beyersdorf, Sr. who preceded him into the glory of Heaven, and Lenora Beyersdorf, and he was the beloved husband of Lieselotte Zindler Beyersdorf for nearly forty years. He will forever be remembered by his children Matthew Allen Beyersdorf, J.D., Heidi Marie Beyersdorf, M.D., and Dr. Andreas Joel Beyersdorf; his daughter-in-law, Amy Beyersdorf; his grandchildren, Jacob Franklin Beyersdorf and William Cody Beyersdorf; his sister and brother-in-law, Carol and Rev. David Sternhagen of New Orleans, LA; four nieces; four nephews; and countless friends and family who were blessed to know him. Allen loved preaching and teaching the Gospel message, being with family, traveling, laughing, creating artwork, and collecting coins, stamps, and trains.

Allen touched the lives of many people with his life and work at Living Word Lutheran Church and maintained his sense of humor all the way to the end. Friends and family are invited to attend a visitation at O’Connor Mortuary, 25301 Alicia Parkway, Laguna Hills 92653, on Friday, August 26, 2011, from 6:00-8:00 P.M. His funeral will take place at Living Word Lutheran Church, 23561 Alicia Parkway, Mission Viejo 92691, on Saturday, August 27, 2011, at 10:00 A.M. In lieu of flowers, the family requests that donations be made to the Pacific Meso Center at the Pacific Heart, Lung, and Blood Institute, which is dedicated to finding a cure for mesothelioma. The center is located at 10780 Santa Monica Blvd., Suite #101, Los Angeles, 90025.