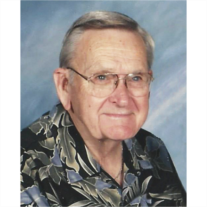 Allan was born Sept. 17, 1929 at home, in Cumberland, WI to Frederick and Beatrice (Meloy) Strubb. He was the third of three children. He absorbed the environment of woods and water in this northwestern Wisconsin environment. In 1943 the family relocated to San Diego, CA where greater employment opportunities prevailed. Allan experienced the excitement of war-time San Diego and related to it throughout his lifetime. In 1947, he graduated from Sweetwater Union High School in National City, CA. Later that year he met his forever love, Dolores Joy Arnes, behind the soda fountain of a Cumberland, WI drug store. In 1948, he enlisted in the Army for 4 years, one of which was spent in Korea. Before departing for overseas in 1950, he and Dolores were wed in Ft. Lewis, WA. The following years included two wonderful daughters, Melanie and Judy, a degree in Mechanical Engineering from Oregon State, life in San Diego and Mission Viejo, work on the Atlas, Centaur, Saturn, S-IVB, Skylab and Space Shuttle programs; all very fulfilling.

As the years passed Al became aware of other yearning, especially travel and organizing. He became a charter member of the Mission Viejo Elks Lodge and, in its early years, organized Las Vegas bus and Caribbean Cruise trips. This led to becoming a travel agent as an avocation. In the years to follow, he and Dee traveled the world – six of the seven continents. After her death in 2010, Al made it to the 7th, Antarctica.

Al loved music and enjoyed years singing in the Choir at Mount of Olives Lutheran Church and with the Saddleback College Costa Chorale.

Funeral Services will be held on Saturday, September 2, at 11:00am at Mount of Olives Lutheran Church, 24772 Chrisanta Drive, Mission Viejo, CA 92691.

In lieu of flowers the family asks that donations be made in his memory to Mount of Olives Lutheran Church or Shriner’s Hospital for Children – Los Angeles.