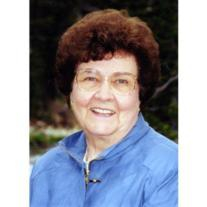 Alice Jean (Jackson) Salter passed away on February 25, 2012 after a long battle with Alzheimer’s. She was born on March 11, 1931 to Harry “Ronald” and Theresa (Frank) Jackson in Dungannon, Ohio, a small section of Franklin Township in Ohio’s Columbiana County. Alice attended elementary and middle school in Columbiana County, and graduated from Salineville High School in 1949.

In 1952 she married Richard James Salter. They settled in the Calcutta area, where they lived for 40 years before moving to Irvine, California in 1992 to be closer to their children and grandchildren.

While raising a family and working full time as a special education teacher at Robert Bycroft School in Lisbon, Ohio, Alice also continued her education. In 1976, she graduated from Youngstown State University with a Bachelor of Arts in Education. She continued to work at Bycroft until, after 26 years of joyful and tireless service, she retired in 1991.

Alice is survived by her loving and dedicated husband of 60 years, Richard James “Rip” Salter, Sr. of Irvine, CA; two sons: Richard J. (Sally) Salter, Jr. of Irvine, CA, and William A. (Diane) Salter, of Torrance, CA; and a daughter, Theresa A. (George) Carper of The Woodlands, TX. She is also survived by her sisters Kathryn (the late DuWayne) McDevitt and Harriet (Robert) Diehl; her brother Kenneth (Vonnie) Jackson; her five grandchildren: Shannon Salter of Las Vegas, NV; Kathryn (Brian) Manchester of Raleigh, NC; Richard “James” Salter III of Irvine, CA; Alexander Salter of Torrance, CA; and Summer Carper of The Woodlands, TX; one great-grandson, Preston; and many wonderful nieces and nephews and their families.

In lieu of flowers, the family requests memorial contributions to the Orange County chapter of the Alzheimer’s Association.