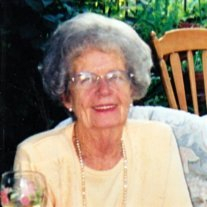 Shorty was born in Muskogee, Oklahoma on February 9, 1924 to Elmer and Mary Wyrick. She was the oldest of their five children; Shorty, Fern, Marvin, Benny and Bobby. Elmer gave nicknames to all of them, and her’s was Shorty. That is what family and friends called her, other friends called her Jerry, her grandchildren called her Goose and I called her Mom.She graduated from Muskogee High School and went to work for the Army. It was at a nearby Army base that she met the love of her life, Robert Moore Watkins. Bob had just graduated from Hobart College in New York and was in Officer’s Candidate School and stationed in Oklahoma. That day, he had led his men on a long hike in full gear and certainly didn’t feel like going to a dance. But he did…they met…they danced…and were married on Shorty’s birthday in 1944. He left for the war in Europe and then the Pacific and came out of the Army as a Major with a Bronze Star, Purple Heart and other medals. Shorty stayed in Muskogee with her family and it was during those years she had their only daughter. After the war, they moved to New York where Bob was employed with General Electric, a company he stayed with all his career. After a few years, they moved to Richland, Washington and it was there they bought a house, raised their family, made friends and made a home in the desert by the Colombia River. They made great friends and threw great parties…fueled by martinis, of course! Shorty always welcomed friends and family into their home…her motto was the more, the merrier! In 1966, they were transferred to California where they lived in Saratoga and later moving their horse ranch in San Martin. It was there that a generation of nieces and nephews visited every holiday and summer, riding horses and making lifelong memories. They moved to Rialto, to Las Vegas and finally back to Laguna Hills to be near family. They enjoyed those years with family gatherings and making new friends, Shorty and Bob had been married 61 years when Bob passed away in 2005. Shorty lived on enjoying reading, gardening, making cookies for her son in law and her visiting friends and family. There was a 60 member family reunion in Lake Tahoe in 2010 where Shorty was in every picture! She died after a brief illness..which turned out to be a 34 day going away party as she was visited by many family members and friends. She passed into the arms of God on the afternoon of November 21, 2013. Shorty was baptized in Muskogee at the Southern Baptist Church and remained a life long Christian, so we are all assured of where she is. She is survived by her only child, Mary Lou Watkins Rhebeck; her beloved son in law, Van Rhebeck; her adored grandchildren, Lindsey Rhebeck Arnette and husband Kip Arnette and Regan Rhebeck who was her helper and companion in her later years; her brother and sister in law, Benny and Glenda Wyrick of Pasco, Washngton; and countless nieces and nephews of many generations who all loved Aunt Shorty. Also, needing to be included are her ‘other daughters’; Sheila, Ellen, Debbie and Sara who became faithful and loving girlfriends to her. She lived through amazing years and leaves a legacy of love. Shorty will be missed.

In lieu of flowers, donations may be made to:
Braille Institute of America
www.brailleinstitue.org
(323)6631238