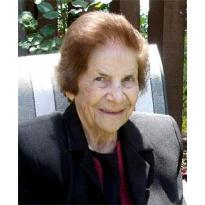 Alice Farah Turk passed away peacefully in her home on November 11, 2008.

Alice was born December 14, 1925 to Semaan and Shafiqa Farah, the only girl of seven children. She lost her mother at a very young age but she overcame all odds and excelled in her studies and continued to be a teacher of English and Mathematics. She married her husband Anton Salim Turk, then, shortly after marriage, accompanied him to Tripoli, Libya. They settled there and raised three sons together, Salim, Shukri and Hazem. Later, she moved on to work in the diplomatic field where she was a secretary to the ambassador and a translator in different embassies. Her husband passed away unexpectedly at a fairly young age. His early death affected her very deeply but due to her strong faith and belief, she continued on raising her sons the best way she could. She immigrated to the United States in 1980 where her sons continued their higher education studies. Her sons always stayed close to her and gave her all the love and care she needed till her last days.

Alice was a loving wife, caring mother, beloved grandmother and a dear friend to many. Her loving attitude and affection made her loved by everyone who knew her. She will be greatly missed by her family and friends.