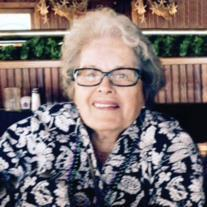 Alice and Carl lived in Carpinteria for 30 wonderful years. Alice was beautiful, gentle, kind, funny, loving, generous and a treasure to us all.