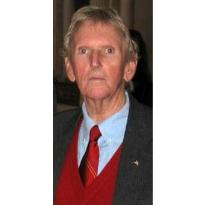 Beloved husband and father died peacefully at home on Dec. 11, 2008 after a long battle with cancer.  He was born in Klaipeda, Lithuania, on May 16, 1936 to Paul and Sophia Kerza.  During WWII he emigrated to Poland and later attended Wroclaw Medical School.  In 1961 he emigrated to the United States of America and received his PhD in immunology from The Catholic University of America in 1973.  His career in medical research included Johns Hopkins and ultimately led to Program Director at NINDS at the National Institutes of Health NIH in Bethesda, Maryland.  During his 27 years at the NIH, he received numerous awards and commendations for his dedicated and distinguished service as well as for the genuine difference he made to further research in the fields of neuroimmunology and neurochemistry.
Algimont is survived by his wife of 38 years, Margaret, his son Paul, brother Edward, and numerous nieces and nephews.
Visitation will be Tuesday, December 16, from 7 to 9 pm at O’Connor Mortuary, 25301 Alicia Parkway, Laguna Hills, CA.  Funeral Mass will be on Wednesday, December 17, 2008 at 9 am at St. Nicholas Church, 24252 El Toro Road, Laguna Woods, CA, with internment to follow.
In lieu of flowers, memorial donations in support of Dr. Yun Yen’s research may be made to City of Hope, 1500 E. Duarte Rd, Duarte, CA 91010, Attn: Central Processing or to Odyssey Hospice, 7077 Orangewood Ave., #201, Garden Grove, CA 92841.