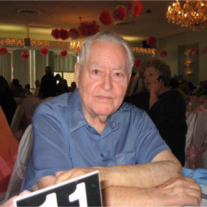 Alexander Boggio is survived by his wife, Maria, and three children : Ray Boggio, Umberto Boggio and Alexandra Boggio Wooldridge. He is also survived by a granddaughter and two great-granddaughters.

Alexander was a very proud veteran of the World War II and a part of The Greatest Generation. He grew up in Bessemer Michigan and San Giorgio Italy, the only son of Louis and Caterina Boggio. He graduated Thunderbird University in Arizona with degrees in International Business. He worked all over the world, had a passion for education, Latin American studies and languages where he spoke fluent Italian, French, Spanish and a great deal of Portuguese. His attention to detail and organization was legendary.

He served several military campaigns in /Southern Italy and North Africa with distinction during the war. The discipline and patriotism he learned in the USArmy Air Corp never left him, as friends and family will attest.