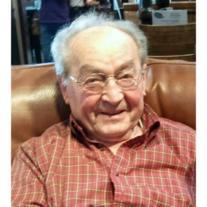 Loving husband, father, grandfather and great-grandfather passed away peacefully in his sleep on July 15, 2012 in his home due to melanoma cancer.

He was born on June 14, 1920 in Verona, Italy, the youngest of 7 children. He came to America after being drafted into the Italian army and brought to a POW camp in Long Beach, California. Here he met his bride, Jeanne Marie Gasper, who was working in the camp driving army trucks. The two fell in love and after the war when Alessandro returned to Italy Jeanne followed him. The two worked for several years in Switzerland: Jeanne for the Pope’s Children’s War Relief Society and Alec as the head wine steward of the Grand Hotel on Lake Lucerne in Brunnen, Switzerland. The two were married in an Italian province of Switzerland on March 6, 1947. They then travelled back to America aboard the Queen Mary and by train to California. They set up their home in Long Beach. Jeanne worked as a secretary and Alec in construction. They had their only son Marc Angelo Pizzolo on May 8, 1953. In 1955 they moved to Garden Grove where they resided until 1971. They then moved to Anaheim before building a home in Irvine.

Alec officially retired from the construction business in 1982 as the supervisor of Facco Inc., but continued working on projects including their home in Irvine and two homes in San Juan Capistrano for his son and daughter-in-law. Alec was an avid cyclist and soccer fan. If not watching a soccer game he was out riding his bicycle, twenty-five to fifty miles every other day. He had a tremendous love for his family, and his biggest joy in life was spending time with them.

Funeral services will be held on Friday July 20 at 1 pm at the Mission Basilica San Juan Capistrano.