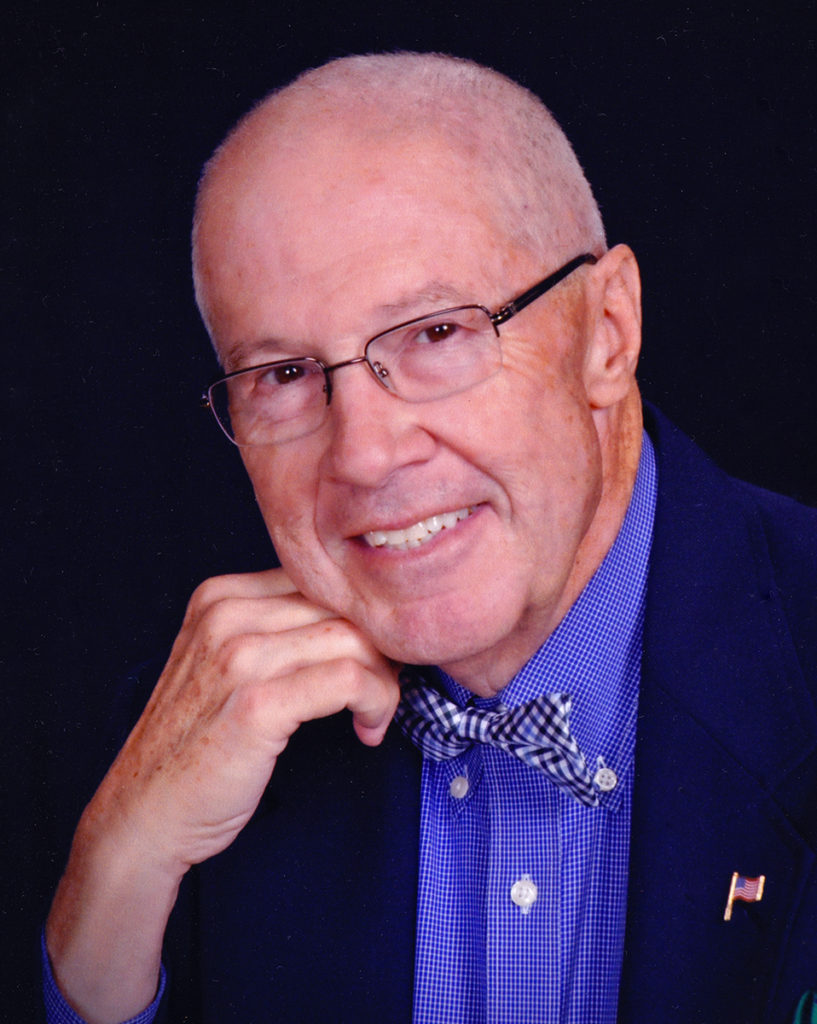 On the night of January 10, 2019, Al passed away peacefully after an extended battle with cancer and resulting pneumonia at about 10:45pm. He was at home and surrounded by his adoring wife, four loving sons, and a granddaughter, all praying together as he took his final breaths. Al was 81 years old.

Al was born on January 25, 1937 in Lawrenceburg, TN. He was the first born of three children to Christine and Albert Michael Beuerlein, Sr. The family moved to Springfield, Mo in 1945 when Al was eight years old. It was in Springfield that Al and his siblings and parents began to establish their permanent roots in what would become their true hometown. The kids attended St. Joseph Grade School where Al was a very good student, a Cub Scout and Boy Scout, and an altar boy at the Catholic Church. It was at this point that Al also began to show the early signs of very good athletic ability.

After graduating 8th  grade at St. Joseph, Al attended St. Agnes High School where he was extremely active. He was a multi-sport athlete participating in baseball, basketball, football, and track and field. Al also discovered what would become a life-long love affair with music at St. Agnes. He would go on to receive honors at the district and state levels for both solo and group vocals. Speech and Debate became another area of strength for Al as he received honors at both the district and state levels here as well. To cap off a brilliant high school career, Al was also elected as St. Agnes High School’s first Student Body President.

In 1955, Al enrolled at St. Benedict’s College (now Benedictine College) in Atchison, KS where he obtained his bachelor’s degree in Liberal Arts. He also was elected to serve on the student government as secretary/treasurer and excelled on the baseball team.

Upon receiving his college diploma, Al enlisted in the US Navy where was on active duty from 1959-1962, serving tours on-board two naval vessels in the Pacific Ocean. Along the way to earning the rank of Lieutenant, he carried the titles of Communications/Operations Division Officer and Executive Officer/Navigator.

After completing his naval commitment, Al began working for the City of Los Angeles. His first position, in 1962, was in the Personnel Department where he was promoted to Senior Personnel Analyst. In 1966, Al was transferred to the City Administrator’s Office (CAO) and promoted to Senior Analyst. His next stop was at the Department of Parks and Recreation in 1968 where Al was promoted to Management Systems Supervisor. After 7 years away from the CAO, Al was transferred back in 1975 and obtained the title of Chief Administrative Analyst.  Over the next 14 years in this role, he was in charge of three different staff groups at various times: Grants Administration, Management Audit, and Productivity Improvement. Al created the City of L.A. Productivity Program and was recognized for this by UCLA with an Executive Management Program certificate. He also was awarded a summer fellowship to the University of Kansas.

In 1989, Al was transferred to the Los Angeles Police Department and promoted to Police Administrator in charge of a support bureau with 4 divisions of 450 employees and a $600 million budget. He was the highest-ranking civilian in a 10,000-employee operation and the only employee classified as Police Administrator. Al also served as the Commanding Officer of the Fiscal Support Bureau, which was on the same level as a Deputy Police Chief. As a first level adviser to the Police Chief, he was additionally responsible for reporting to the L.A. City Council and media on all budget matters. It now takes 3-4 police administrators to manage this position. During Al’s run with the LAPD, a few of the memorable stories were the Rodney King motivated L.A. Riots, the Michael Jackson investigation, and the O.J. Simpson murder case/trial.

Al retired from the City of Los Angeles in 1995 following 33 years of dedicated service. Upon retirement, Al received an unexpected, but well deserved/earned, Special Resolution and plaque from the L.A. City Council. From 1995-1997, Al worked as a Consultant for the California Employment Resource Group.

Al was always very active in his community. From 1968-1974, while raising the family in Alhambra, CA, he served in various roles for the Alhambra American Little League including multiple years as President. Motivated by their desire to send their 4 sons to Servite Hight School in Anaheim, Al and Annette moved the family to Fullerton, CA in 1976, but he continued to volunteer at soup kitchens to feed the homeless in L.A. through 1988. He also gave many hours by reading for recordings for the blind and dyslexic.  From 1989-1995, Al continued to display his love for music as a member of the Orange County Empire Barbershop Chorus.

In 2002, Al found what would become his primary charitable focus, Family Assistance Ministries (FAM). He became a volunteer board member and served as Secretary and Vice President. Al created almost all the infrastructure for this faith-based interdenominational charity which focuses on feeding, sheltering, and assisting in need single women and women with children.  He remained involved with FAM throughout his illness and until he was no longer able.

The Beuerlein family would like to thank all of the friends and family who loved and supported Al throughout his incredible and full life. He loved and appreciated every one of you, and he probably told you that directly at some point! He had an amazing ability to make whoever he was talking with feel as though they were the most important person in the world and, most times, that person would walk away from that conversation feeling better about himself/herself than they did before. The family would also like to thank all those who prayed for Al, the most ardent believer in the power of prayer in the world. Those prayers gave him strength and the belief that he was going to be alright, no matter the outcome.

The family would also like to thank all of the doctors, nurses, therapists and caregivers from City of Hope, Mission Hospital, and Kindred Hospital who fought alongside Al and encouraged him daily to simply “try his best.” Words cannot express how grateful we are for your efforts and that we found our way to you.

In parting, we hope that all who read this obituary will be able to sense the extreme gratitude that we – the family of Al Beuerlein – have for being so lucky to have had Al as our model and our heartbeat. He lives on in us and he was a magnificent example for how to live life with faith as the focal point. In the hospital, every night as he fell asleep with his rosary clutched tightly in his hands, he would repeat the prayer (8-10 times) that defined the man that he was,”Jesus, I trust in you.”

Family Assistance Ministries (FAM) was Al’s favorite charity and he volunteered thousands of hours toward this ministry. If you would like to make a donation, you can either: 1) Go to the FAM website home page (family-assistance.org), click on Give Now, then scroll down to Donate Now. Just above the Donate Nowbutton, you will see a drop down box to designate your donation in Memory of Al Beuerlein. Finish by clicking on Donate Now, 2) Make checks out to FAM. In the Memo line please note: in Memory of Al Beuerlein. Send checks to FAM at: 1030 Calle Negocio, San Clemente, CA 92673, or, 3) Contact Noelle Leland at (949) 492-8477 or noelle@family-assistance.org.