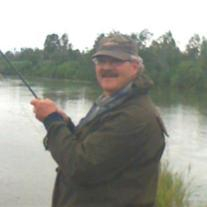 Beloved husband and father, was called home to forever dwell in the house of the Lord. We are broken, but rejoice knowing one day we will be reunited.

Rick worked for Wells Fargo Bank, Commercial Division for 34 years. He formed strong bonds with many of his co-workers. After his retirement in 2010 he enjoyed his many interests, including fishing, shotgunning golf, and his men’s bible study.

He was a highly principled man and devoted to his family.

He was predeceased by his father, Dr. Robert L. Ehrke and his mother, Alma Jeanne Ehrke of Coarsegold, CA. He is survived by his wife, Roxanne and his beloved son, Sean Albert. Extended family include brother, Ronald Ehrke; sister, Roberta Murphy; 2 nieces, Nicole and Michelle, all of central CA.

In lieu of flowers, donations made be made in his honor to Calvary Chapel, SJC.