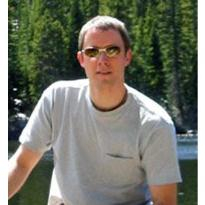 Roohk, Aaron M., 36, born June 6, l972, went to be with his Lord, March 7, 2009 after a nine-year battle with brain cancer. Aaron was born and raised in Orange County, and except for two years in Colorado, lived in Orange County his entire life. He graduated from Dana Hills High School in 1990, and Biola University in 1994. He was a computer consultant by occupation and an avid car buff, especially BMW’s and older Mercedes. Aaron did not view his cancer as a liability in his life. He never complained and considered it a ‘blessing from the Lord,’ to help strengthen himself and to help others with compassion and kindness.

He is survived by his father and mother, David and Cathie Roohk of Laguna Niguel; his brother and sister-in-law, Jon and Jennie Roohk, and his niece, Sophia Roohk, of Laguna Hills; and his maternal grandmother, Marian Daneri, of San Clemente. Aaron will be buried at El Toro Memorial Park, Lake Forest, CA, alongside his maternal grandfather and uncle. A family graveside ceremony will be conducted on Thursday, March 12 at 11 am. A celebration of Aaron’s life will be held at Rock Harbor Church, 345 Fischer Ave, Costa Mesa, on Saturday, March 14 at 10 am. Aaron’s energy and love for life, people and his Lord will be greatly missed by his family and friends.