Stubborn Love | The Power of Lyrics

“Its better to feel pain, than nothing at all.

The opposite of love is indifference.”

It was around 10:30 on a Wednesday night, and there I was, driving out to Laguna Hills to bring someone who had passed away into our care. Only this time I was not going to be calling a stranger to let them know their loved one was in our care. I was not going to fill out any paperwork with a strange name at the heading, nor was I going to be setting up an appointment for the family to meet an Arranger.

The man I was receiving was my great-uncle. I was going to be calling my grandmother (telling her that her brother was in our care), and I was going to be writing a name I had heard my entire life into our log.

I had received the call about his somewhat “expected” death about 2 hours earlier. I had been out playing a night round of disc-golf with some of my closest friends. When I told them I was leaving early to go comfort my mother and grandmother, they shook my hand, hugged me, gave their condolences, and wished me well. I was fine. In fact, I was more than fine. I was relieved.

My Uncle Jim was someone who could be easily forgotten. Not by choice, but by comfort. He was an addict, a borderline recluse, and a common dealer of the ‘ol disappearing act. I had maybe met him a dozen times in my 23 years, and each time there was a complaint about him. I had never really grown close to him. He was family but felt more like an acquaintance.

Yet even still, there I was, driving out to work on my night off, ready to make sure he had a good reception into the mortuary Care Center.

As I pulled into the parking lot, I got an idea. I parked, and I walked over to the Seven-Eleven in our neighboring shopping complex. I bought a Monster energy drink, and a pack of Marlboro Reds. I haven’t smoked since I started working for the mortuary, but Reds were (Uncle) Jim’s favorite. I searched for a lighter in my car, put my Amazon Kindle music player on shuffle, and took a long drag out of the cigarette. The first song started playing, and it broke me down. 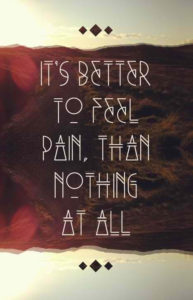 The song that came on was “Stubborn Love” by The Lumineers. For those of you who have never heard it, it is about a gentleman involved with a woman who is always letting him down. She lies, steals from him, and cheats but yet he still loves her. He still is trying to find a way to make it work.

The song made me realize what and why I was doing what I was doing. The fact that Jim had caused so much pain in our family was thrown out the window. I realized my indifference towards him was selfish, and that my stubborn love for one of my most distant family members led me to where I was at that exact moment. It was stubborn love that led my grandma to stay awake for almost 48 hours to make sure she was there for his final moments, and it was stubborn love that had my mom playing his favorite Elvis tunes in his ear as he lay there unconscious.

I find that some of life’s most precious lessons can be found in the lyrics of some of our favorite songs. Families usually bring in an entire playlist of music that helps them reminisce about the life their loved one led. It’s beautiful to sit in the back of the chapel and hear I Did It My Way and hum to Somewhere Over The Rainbow. Why? Because music stays with every generation to come. The lessons and memories locked into some of our favorite lyrics are going to be here forever. Some will bring us pain and sadness, but many will bring us understanding and light. From now on, Stubborn Love will forever be associated on that cold Wednesday night, in my favorite parking lot, having one of Jim’s favorite vices.

As Chuck Riccardi said a few blogs back to “Stop and smell the roses…” I encourage you to maybe stop and listen to the lyrics. It may just be the lyrics of your life, or, like in my case, someone else’s.

What songs have lyrically stood out to you?

Have you ever had a song stuck in your head? Next time, look up its lyrics and see what happens!

Do you have any songs that have a special meaning to you or a loved one?