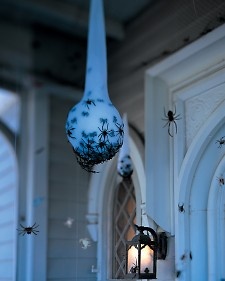 I love October.  Autumn is beginning to settle in.  My wife and I celebrate our wedding anniversary and her birthday.  We take our fall vacation.  We decorate for Halloween and my wife carves a few pumpkins.  Not ordinary pumpkin faces, but creative, scary pumpkin faces.  She definitely has a talent for pumpkin carving.

At our house, October is also spider month.  We usually have six or seven major webs strategically built around our walkway stairs, deck and landscaping.  And this year, our garden spiders are BIG!

My wife doesn’t appreciate the webs.  They get in her way and always at the most inopportune time.  When my oldest daughter visits, she will not come to our front door without first calling me from her car begging for me to meet her in the driveway and then escorting her to the front door.  My youngest daughter thinks spiders (in their webs) are cool. We read “Charlotte’s Web” a few times when she was a girl and I believe it changed her position on spiders.

I used to be afraid of spiders.  I remember watching an old episode of Rod Serling’s “Night Gallery” when I was a boy.  It was the episode where the woman flushed the spider down the drain and it would come back larger each time until it was a giant spider in the room.  Scary! Creepy!  From that point on, I would do my best to always avoid spiders.  Yet, how could something so small and purposeful cause so many people so much anxiety and fear?

are estimated to experience arachnophobia.

Why are we afraid of spiders?  Well, for my wife, they are just plain creepy.  I have an associate at the mortuary who is so terrified by spiders that she nears fainting just at the mention of the word. We never joke about spiders with her. We’re afraid we’ll literally scare her to death! I have a friend who grew up thinking that all spiders are poisonous. To clarify,they’re not.Movies have portrayed spiders in so many scary ways that we all probably expect to run into a giant spider in any cave, jungle or forest that we might explore.

I got over my fear of spiders by becoming fascinated by their web-making abilities and their usefulness as bug-catchers.  I can stand and watch a spider spin its web without any anxiety or fear.  Over the past ten or so years, I have looked forward to our different species of garden spiders coming out to find a place to build their webs.

Right now, we have one who is living in our bamboo forest.  Another has a large web stretching from our palm tree to the hedge by our wall.  A big, bulbous spider has its web attached from the corner of the roof to the BBQ on the deck.  I do have a new-comer to the neighborhood who built an impressive web a third of the way across our deck.  Per my wife’s request, I relocated that spider to a nice area in our front landscaping near our large Plumeria.  It greets me every morning as I walk down to the driveway to my car.

So, here it is, October.  The season of spooky Halloween stories.  Trick-or treaters dressed as witches and princesses; pirates and superheroes.  Black cats and full moons.  Mummies and vampires…and spiders.

I don’t fear my spiders anymore.  I actually like having them around.  They catch a lot of bugs and flying insects that might have made it into the house.  They spin majestic webs that really do shine in the full moons light.  I guess they’ve become more than spiders to me.  They are my little Halloween pets.

Are you still afraid of spiders?   If not, how did you get over the fear?