“Can you Walk, Talk, and Chew Gum?”: The Myth of Multitasking 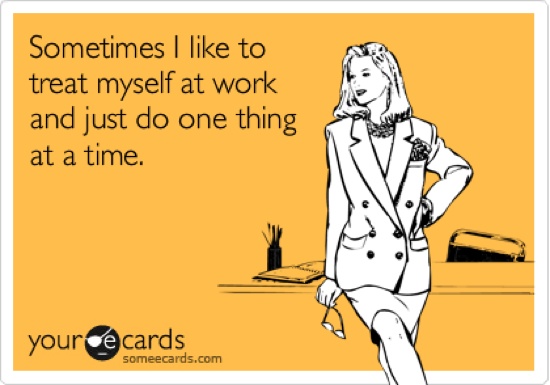 I can’t multitask!  I’ll be the first to admit it.  I have resigned myself to the fact my brain can only focus on one activity at a time.  There should be a thought bubble over my head that reads “occupied” or “unoccupied” so people know when it is safe to begin speaking to me about a new topic.

People walk up to me at work and just stand in front of my desk while I’m typing.  When I look up they say, “I’ll wait until you finish what you are doing.”  History has taught them it is the only way to have my complete attention.

One of my most embarrassing moments, and mind you there are many, came while I was trying to multitask at work.  I was reading an email when the phone rang.  I was focusing so much on reading the email that I answered the phone, “O’Connor Mortuary, this is Lori, how may I love you?”  Yep, that happened!

Fortunately I knew the person on the other end and we both got a good laugh out of it.  You better believe I turned every shade of red imaginable when those words first came out!  I vowed then I would focus on one task at a time.

I was discussing my limited ability with one of my coworkers who told me that multitasking is actually a myth.  I thought he was being polite but he insisted that he had attended a seminar where he learned that the mind only truly concentrates on one thing at a time.  When you divide your attention it produces mediocre results.

Multitasking is defined as engaging in multiple tasks at the same time, but what I learned is it is only possible under two conditions:

What image does multitasking conjure up for you?  I see a busy executive talking on the phone, typing an email and nodding to her assistant while tossing back coffee.  Boy, if only I could work like that.  I would get things done so much faster.

Here’s the catch.  While it may appear they are doing it all, looks can be deceiving.

It turns out multitasking is actually counterproductive and in some cases unhealthy for the following reasons.

Reduces Productivity- You in fact are more productive when you begin one project and see it all of the way through whenever possible.  Interruptions ruin your train of thought.  All of the stops and starts end up wasting time and make you less efficient.

Leads to More Mistakes- Multitasking is a good way to get work completed quickly, but not always accurately.  Studies show that individuals who multitask make up to 50% more mistakes and suffer a 10-point fall in their IQ.

Creates Health Problems- The most obvious concern is stress, which can lead to high blood pressure and ultimately more serious problems. Stress also leads to poor eating habits, which can lead to weight gain and other health concerns.  Multitasking can also affect your brain and lead to short-term memory loss.

So next time you have a mountain of work piled in front of you, heed the advice found in Aesop’s fable “The Tortoise and the Hare,” – “Slow and steady wins the race.”

Have you suffered health issues from trying to “do it all”?